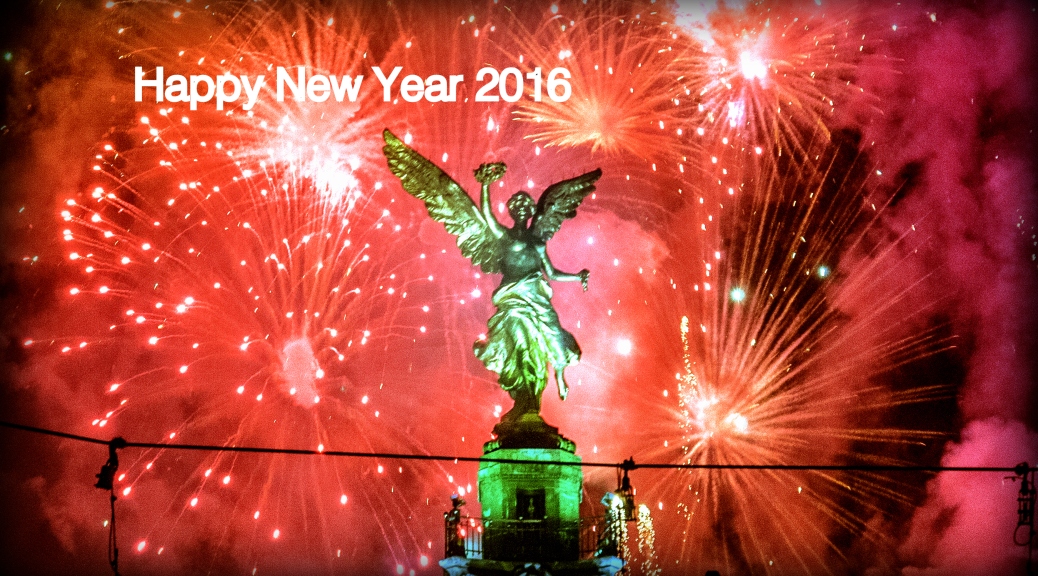 Another Western New Year is upon us. This is a time for reflecting on the past twelve months, and for setting new goals. It’s an increasingly interesting process since we live, as the ancient curse has it, in the most interesting of  times.

There is no doubt that there were many difficulties in 2015. The complexities of the Middle East seem to grow ever more complex each week, and have triggered a refugee crisis that stretches and challenges the whole of Europe morally and practically. The Chinese are building new land to stake their claims in Asian seas, signalling new sources of potential future conflict. The World economy is still sailing  in uncertain waters and many are concerned with increases in asset prices relative to true underlying economic growth, or the continuing inertia in Europe after the Greek crisis of the summer. It’s easy to be pessimistic.

But take a step back, and there is an extraordinary level of progress driven by a combination of technology, the thirty-year economic march of the developing world and an undervalued contribution from global NGOs.

Ideas and innovation, markets and human charity have made profound differences. In many important ways, and on average, the world is improving.  On reflection, it seems many more people than not are striving to make it a better place – for themselves, their families, their teams and their societies.

To use a phrase that originates from Abraham Lincoln’s first inaugural address and was popularised by cognitive scientist Stephen Pinker, the actions of the better angels of our nature may still outweigh the activities of our demons. Pinker used the metaphor of angels to discuss what is an extraordinary decline in violence since our hunter-gatherer roots. It can also stand for other engines of human progress.

There are plenty of commentators who see this more positive big picture above the constant clatter and noise of more traditional news. Indeed, as one high-profile antidote to the focus on the negative, Bill Gates has written a recent letter on human progress in 2015. You can find it here.

Inspired by that, this article represents my thoughts across six themes:

Parts of the left in the West have developed a renewed focus on inequality. Thomas Piketty’s 2013 magnum opus Capital in the Twenty-First Century argues that the rate of return on capital in developed economies is persistently greater than the rate of economic growth, causing inequality to always increase without intervention. The world is becoming more unfair on some measures. That has got a lot of media and political attention.

However, over the past thirty years or so, extreme poverty has declined massively thanks to a great renewal of economic growth in the developing world – across South America, China, India, Turkey, parts of Africa and many other places.

On October 4th 2015, the World Bank announced that

“the number of people living in extreme poverty around the world is likely to fall to under 10 percent of the global population in 2015”.

“This is the best story in the world today — these projections show us that we are the first generation in human history that can end extreme poverty,’’

Other metrics show both this progress, coupled  it must be said with a continuing need for focus. For example, the number of people with no access to clean drinking water fell below 700 million for the first time in history. More than 6.6 billion people, or 91% of the world’s population now use a clean drinking water source, up from 76% in 1990. Child mortality dropped for the 43rd year in a row

Africa marked a year without any polio. Bill Gates – in that annual letter on human progress wrote:

“This milestone represents a huge victory—one that some experts feared would never come.”

In April, health officials declared the Americas were the first part of the world to have eliminated rubella – the result of a 15-year program.

And after a difficult start, and too much lost life, the Ebola crisis in West Africa was brought to a close. Schools and businesses reopened. There are  promising results from experimental Ebola vaccines.

The longer battle against AIDS is also showing progress. Deaths are in decline, from a high of 2 million in the early years of this century to 1.2 million this year.

Beyond these victories against the ancient enemy of disease, technological progress in health continues. Nobel prizes went to medical researchers who developed drugs that helped the poor – including Artemisinin, which treats malaria, and Ivermectin that hammers diseases caused by parasitic worms.

More steps were made in the 3D printing of replacement body parts, and we have just seen initial steps in using portable, wearable – even edible – low-cost tech to help manage health and fitness.

Longer term, gene editing may drive incredible benefits – and quite possibly some hard moral choices – in medicine and agriculture.

There remain parts of the world shuttered in darkness, or parts which may be economically successful, but where our normal assumptions of free speech do not hold. However, it is easy to underestimate the real progress that is sometimes made, although sometimes with small, inch-long steps.

This year the remarkable Nobel Peace Prize laureate Aung San Suu Kyi won a majority in Myanmar’s national elections. In Nigeria, a complex and difficult election resulted in that country’s first ever democratic transfer of power.

The West has moved with remarkable recent speed to fully accept gay rights. Although still a challenging concept for some on a personal basis, a majority of younger people in the US say that same-sex couples should be allowed to marry, and the country’s highest court agrees. Ireland voted to legalize same-sex marriage in a referendum that reflected a very new outlook for that country. Personal freedom matters.

Women voted for the first time in Saudi Arabia, and a number of female councilors were elected. Very importantly, the growth on a global basis of literacy of women continues.

And although the situations in Eastern Europe or the Middle East show the limits of global governance, the climate change conference in Paris in December 2015 did produce a long-term goal to limit global warming to ‘well below’ 2C, or 1.5C if possible. It’s easy to be cynical about this process, but CNN’s John D. Sutter rightly called it:

“a giant shove in the right direction.”

Progress in Space Flight as a Symbol for All Science

For those with a passion for space and space flight, 2015 represented an extraordinary year. The events of the year in space inspire. They push forward the boundaries of human knowledge and stand as symbols of the overall power of science and technology.

We started the year with a European example as the probe Rosetta continued to send remarkable data and images from the active comet 67P/Churyumov–Gerasimenko.

Then NASA’s ion-engine-driven Dawn probe became the first spacecraft to successfully reach two different solar system bodies. After leaving the asteroid Vesta, it arrived at the minor plant Ceres on March 6, 2015. Ceres is a true world that contains a third of the total mass of the asteroid belt, and almost unknown before. Dawn is now mapping its surface in exquisite detail.

In July, the probe New Horizons flew past Pluto revealing  a strange, beautiful and active world of ice mountains and flat, cracked plains.

There was historically significant progress in launch systems, driven by princes of the Internet. Jeff Bezo’s Blue Origins initiative landed a small rocket after take-off. Even more spectacularly, Elon Musk’s Space-X landed a Falcon 9 first stage that had just successfully put a payload into orbit. Both these achievements set up the space launch industry for a level of re-usability dreamed of since the 1950s, and only partly delivered by the complex, expensive and now retired space shuttle system.

And for Brits, we have the rare privilege of having a UK astronaut – Tim Peake – on the International Space Station.

Like the parable of the chessboard where a grain of rice was left on the first square, then two on the second, four on the third and so on, exponential or geometric growth becomes its most miraculous in its later stages. The power of digital tech has doubled every 18-months since the creation of integrated circuits. We are now really beginning to see its potential.

This process – usually referred to as Moore’s Law of course – means that today’s computers are billions of times more powerful than their ancestors.

This creates potential opportunity – ranging from start-ups to major enterprises – of staggering scale.

So as one example, Google’s robotic vehicles have now travelled over a million autonomous miles in Texas and San Francisco without crashing.

Internet and phone access is becoming close to truly universal, which empowers both the rich and the global poor. This was in fact an important United Nations Millennium Development Goal. Ten times as many people now have mobile phones as did at the turn of the century, and Internet penetration of its potential global audience has jumped from 6% worldwide to 43%. This means there are now more than three billion people online, and around 2 billion of them are from the developing world

For enterprises, there is a decade of opportunity ahead around cloud and software-as-a-service, new ways of engaging customers, and new agile ways of getting things done. There are many genuine opportunities to use AI given the redundancies offered by new digital capacity. Those who work in this space are typically fired up with enthusiasm about the potential for positive change.

This may not seem as a grand an area as others, but it is in fact fundamental to freeing up human talent, and enabling the poor to create their own destinies. Good financial systems drove the rise of the West and the first Industrial Revolution. New low-cost systems can make a global difference. Access to financial services  – empowered by technology – certainly makes Bill Gates list.

For example, the middle classes in places like Egypt have issues using e-commerce because their incomes are too low to access normal global banking services, and new forms of banking help with that. Another example: Micro-lending can help create businesses and stimulate enterprise in the most surprising of environments – from cities to villages and farms in the developing world. It can also empower women to drive their own destinies.

And the innovation that drives current change is often lightweight digital banking technology on mobile phones.

One report indicated that between 2011 and 2014 an additional 700 million more people became customers at banks and similar, or mobile financial service providers. The ‘unbanked’ dropped by 20%. In places such as Cote d’Ivoire, Somalia, Tanzania, Uganda and Zimbabwe more adults use a mobile money account than an account at a normal financial institution. India, Brazil and Bangladesh are also showing great progress.

We live in interesting times –  where the engines of progress have made gigantic differences to the fate of humankind, and should on balance continue to do so. There will be challenges, and sometimes great ones. However, it’s possible, maybe likely,  our collective futures will be more utopian than dystopian. That’s a good thought for 2016. Happy New Year.

“Hope
Smiles from the threshold of the year to come,
Whispering ‘it will be happier’…”  – Alfred Lord Tennyson

Keith Haviland is a business and digital technology leader, with a special focus on how to combine big vision and practical execution at the very largest scale, and how new technologies will reshape tech services. He is a Former Partner and Global Senior Managing Director at Accenture, and founder of Accenture’s Global Delivery Network.  Published author and active film producer, including Last Man on the Moon. Advisor/investor for web and cloud-based start-ups.