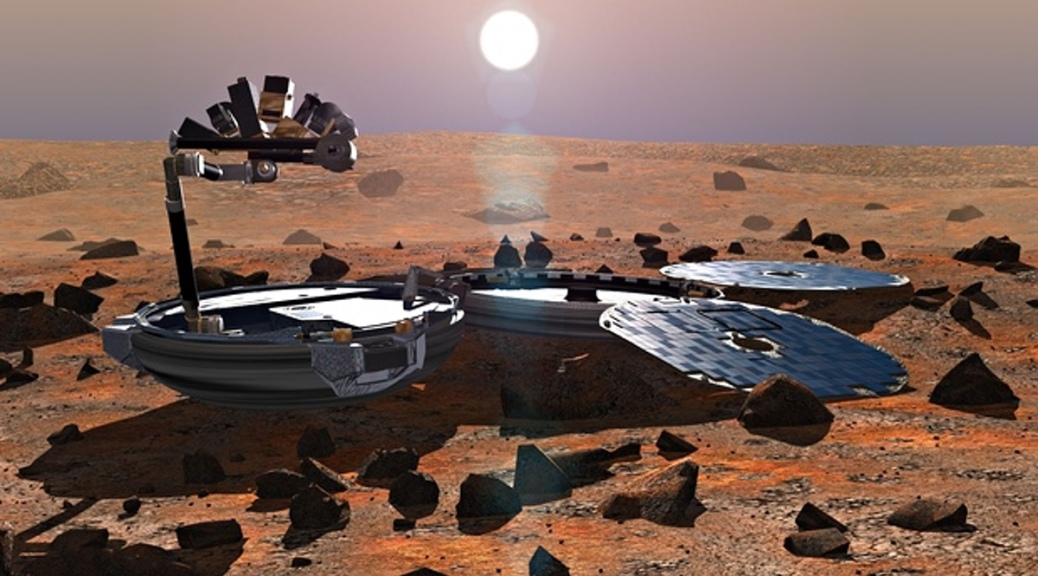 Christmas Day 2003 was meant to be a special day for the exploration of Mars, and for a charismatic scientist named Colin Pillinger. In the end, it was the key moment of a story that involves loss and rediscovery, innovation, lessons around program management and flawed but inspirational leadership.

A probe called Beagle 2 – christened after the ship that supported Darwin’s famous voyage of exploration – was intended to land on the Martian surface in the small hours of Christmas morning, UK time.

Its destination was Isidis Planitia, a vast impact basin that sits across the border between the ancient highlands and the northern plains of the Red Planet.

Beagle 2 was a low-cost, small-scale and minimalist British spacecraft. It had, however, audacious goals to directly search for life. Colin Pillinger was its Principle Investigator.

After piggybacking across tens of millions of miles of empty space, the craft had detached from its mother ship, the European Space Agency’s (ESA) Mars Express, on 19th December 2003 where it would fall towards Mars on a relentless ballistic trajectory. 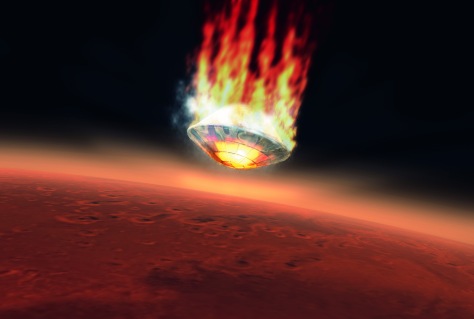 The plan was this. Beagle 2 would slam into the Martin atmosphere at 20,000 km/hour. After a violent deceleration in the Martian atmosphere, parachutes were to deploy. Then just two hundred meters above the Martian landscape, large airbags would inflate to cushion the final impact of the vehicle. The lander would bounce on the surface at about 02:45 UT on 25 December 2003, and come to a stop.

At that point the top of the lander would peal open, pushing out four solar panels. A signal would then be sent to Earth immediately after landing and another the next Martian day to confirm that Beagle 2 had survived both the landing and its first lonely and cold night on Mars.

That was a prelude to the real science. A panoramic image of the landing area would later be taken using the stereo camera. The lander arm was to dig up soil samples for analysis, and a probe nicknamed the mole would inch its way across the surface. Beagle 2 would begin to make its contribution to history.

It didn’t happen that way of course. Instead on that Christmas Morning, there was a cold, distant silence.

A search begun. Throughout January and February, Mars Express, the American orbiter Mars Odyssey, even the great Lovell Telescope at Jodrell Bank would attempt to pick up a signal from Beagle 2. Throughout the Beagle team said they were “still hopeful” of finding a successful signal.

But every time there was no such signal, no sign of the little craft.

The Beagle 2 Management Board declared beagle 2 lost on 6th February 2004. On 11 February, ESA announced an inquiry would be held into the failure of the mission. The results of that enquiry would prove to be highly critical. 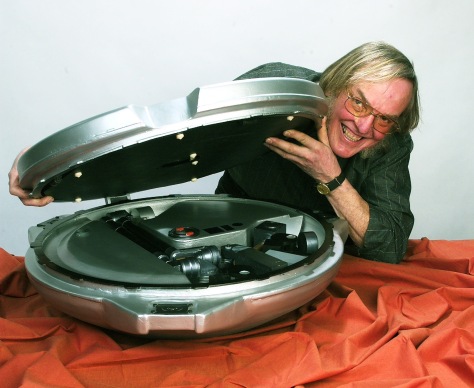 The voyage of Beagle 2 started within the Open University – a British distance learning institution created in the 1960s. Its scientists have been major contributors to the study of a group of meteorites blown off the surface of Mars and the suitability of the ancient Martian environment for life.

In 1997 ESA announced Mission Express with a 2003 launch date. It was then that Colin Pillinger of the Open University team, and a member of the ESA Exobiology Study Group, proposed a lander. The craft would be dedicated to looking for life and conducting chemical analysis of the Martian environment. The name Beagle 2 arose quickly, and Colin himself gave the rationale:

“HMS Beagle was the ship that took Darwin on his voyage around the world in the 1830s and led to our knowledge about life on Earth making a real quantum leap. We hope Beagle 2 will do the same thing for life on Mars.”

The journey had started.

Colin Pillinger was a larger-than-life figure, and had cast himself from the mould of the archetypal British eccentric scientist. He lived on a farm and possessed “mutton-chop” whiskers that always made him instantly recognizable. Personally, he could be challenging. Professor David Southwood of Imperial College would say:

“My own relationship with him in the Beagle years was stormy … Fitting the much bigger Mars Express project, as I had to, around Colin’s far from standard approach was not easy and he could be very exasperating. Nonetheless, he had genius, a very British genius”.

He could also be inspiring and inspirational. Professor Monica Grady was once one of Pillinger’s PhD student. She would say:

“He was a determined and controversial figure. I crossed swords with him more than once in the 35 years I have known him. But he was enthusiastic, inspirational and never failing in his drive to promote planetary sciences and the science that would come from missions to the moon and Mars. He was one of the most influential people in my life.”

He and his team certainly had a flair for grabbing attention. To put the Beagle 2 project on the map and get financial support, they got the band blur to record mission’s call-sign was composed by the band Blur. The calibration target plate intended for testing Beagle 2’s cameras and spectrometers after landing was painted by Damien Hirst.

Pillinger raised sufficient funds to attempt the mission – although funding was always very light by international standards. A consortium was created to build the probe across the Open University, the Universities of Leicester and Wales, Astrium, Martin-Baker, Logica and SCISYS.

Mars Express launched from Baikonur on 2 June 2003, and on it sat its little disk-shaped companion: Beagle 2.

Analysis of the Failure

In May 2004 the findings of the ESA report were published in the form of 19 recommendations, many of which speak about issues that will be familiar to any student of program management.

It could – and certainly was – read as an indictment of Colin Pillinger’s leadership and management style. The Telegraph newspaper would say the report:

“is believed to criticize the management of the project and blame a lack of testing, time and money for its failure. While he is not named directly, the report is likely to be seen as critical of Professor Colin Pillinger … even before the probe left for Mars … critics of Prof Pillinger warned that Beagle 2 had not been adequately tested”

There were recommendations that covered accountability, and adequate resourcing. Others mentioned the need for appropriate systems level documentation and robust margins to cope with the inherent uncertainties of space flight.

There was also an underlying assumption that Beagle 2 had failed catastrophically. So many of the recommendations covered testing of all kinds, and especially the shocks and processes around entry and landing.

But the truth was that Beagle 2’s fate was a mystery. The probe – without landing telemetry – had simply vanished.

Colin Pillinger continued to display his usual spirit after the report. He said shortly after publication “It isn’t over with Beagle by any means.” He continued to push for another landing attempt, but unsuccessfully.

Then tragically, after a period of ill health, he died unexpectedly of a brain hemorrhage, just two days before his 71st birthday at Addenbrooke’s Hospital in Cambridge on 7 May 2014.

The obituaries were respectful. Just getting Beagle 2 started was seen as an achievement, and many gave him the credit for rekindling British interest in space and space flight.

But he died not knowing what had happened to the spacecraft he had conceived and build. 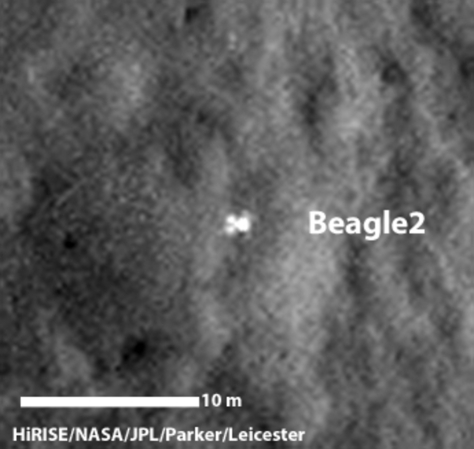 But then history was rewritten.

On 16 January 2015, it was announced that the lander had been located intact on the surface of Mars by NASA’s Mars Reconnaissance Orbiter, in the expected landing area within Isidis Planitia. The images had been taken in 2013, but not analyzed until after Pillinger’s death.

The images demonstrated the probed had properly landed and partially deployed, with its parachute and back cover nearby. Some of the solar panel petals had deployed, but not all, preventing deployment of its radio antenna. Beagle 2 appeared to have just a few mechanical movements and one faulty motor from success.

The history books must be re-written to show that the Beagle 2 mission was a success after the first pictures of the probe proved that it did land safely on Mars, vindicating lead scientist Colin Pillinger.

Dr David Parker, then CEO of the UK Space Agency would comment:

“Beagle 2 was much more of a success than we previously knew. The history books need to be slightly rewritten to say that Beagle 2 did land on Christmas Day 2003.”

In the final analysis, Beagle 2 was a most peculiar space mission – created by a British eccentric and funded poorly. It was also perhaps poorly program managed.

However it was genuinely inspirational, becoming a project that touched people’s hearts and minds. There is no doubt it failed, but we now know  it also came within moments of absolute, joyous triumph. This little, underfunded craft almost worked. As Colin Pillinger himself once said

A little set back like a lost lander should not discourage visionaries.

Images used in this article are from ESA and NASA.

Keith Haviland is a business and digital technology leader, with a special focus on how to combine big vision and practical execution at the very largest scale, and how new technologies will reshape tech services. He is a Former Partner and Global Senior Managing Director at Accenture, and founder of Accenture’s Global Delivery Network.  Published author and active film producer, including Last Man on the Moon. Advisor/investor for web and cloud-based start-ups.